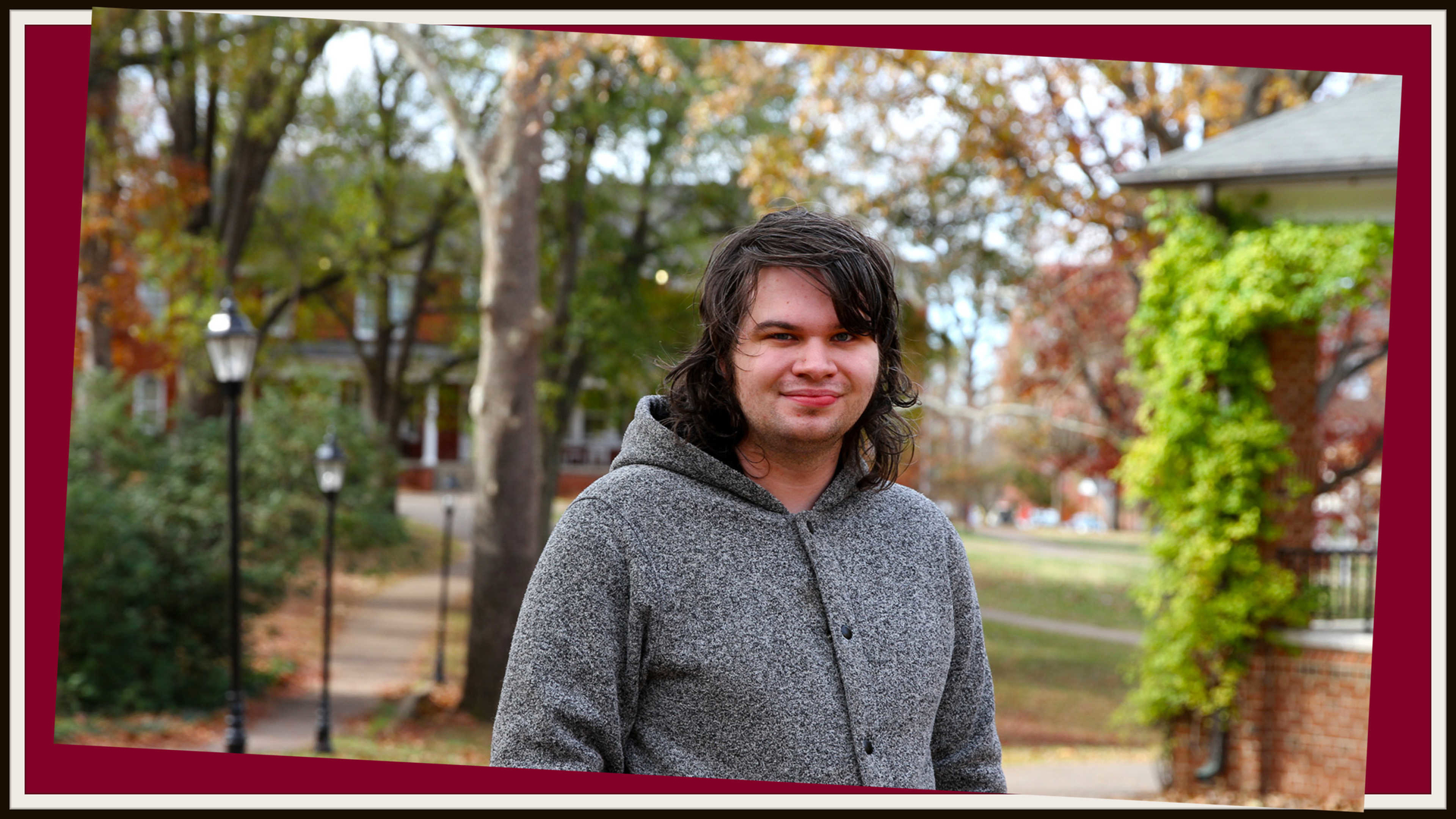 To the casual observer, the field that Honors student Ainsley Kalb ’23 plans to enter sounds as if it were all fun and games. However, the Philosophy and Creative Writing double major from Chapel Hill, N.C., explains that the essence of tabletop game design runs deeper than simply creating an enjoyable pastime.

"As soon as I visited, I was like, ‘Oh no, this is where I need to be.’ There's just something about the atmosphere and the fact that it’s very accepting of neurodiversity and queerness, both of which are things that I am. It just feels like where I'm supposed to be.”

Ainsley is a member of Game Designers of North Carolina, a game-design guild, attends related conferences, and has done contract work for WizKids, a tabletop game company. Having first learned about philosophy from their father who also majored in the subject, Ainsley combined the study with creative writing because they had a genuine interest in each. Both areas also fit well with Ainsley’s career goals.

A Place to Reach Your Potential

Looking back, it surprised Ainsley that Guilford wasn’t their first-choice school.

“When I was originally making my mental list, I'll be honest; it was my third choice. But as soon as I visited, I was like, ‘Oh no, this is where I need to be.’ There's just something about the atmosphere and the fact that it’s very accepting of neurodiversity and queerness, both of which are things that I am,” Ainsley says. “It just feels like where I'm supposed to be.”

In addition to Ainsley’s studies, they are also involved in such campus activities as serving as co-editor-in-chief of The Greenleaf Review, Guilford’s literary magazine, in which a couple of their poems have been published.

At Guilford, Ainsley finds joy in this role.

“It's so cool to be able to see everybody’s submissions. There’s always a huge variety of work. We normally publish visual art in various media. We publish a lot of poetry, but it's a mix of traditional poetry and a lot of free verse and everything in between,” Ainsley says. “We have short fiction and nonfiction, and we normally end up with at least one piece written in screenplay format.”

The Yachting Club is another creative outlet for them. Ainsley describes the group as a general nerd culture club. “Our unofficial motto is, ‘If you're nerdy about it, we’re nerdy about it.’”

The club meets every Thursday night and has social time as well as a formal meeting. Ainsley’s role is to plan the convention where members come together to play board games and video games, watch movies, and more. Vendors also sell their wares. Proceeds benefit Child’s Play, a charity that provides toys and games to children around the world.

Professors have played an integral role in Ainsley’s academic career and college experience. Ainsley notes Jennie Malboeuf, Creative Writing professor and faculty adviser of The Greenleaf Review, for her encouragement and being the type of person who you can tell if you’re having a rough day and will check on you after class. Ainsley also notes English Department Chair Heather Hayton for her incredible passion for academics and the positive impact she has on students.

“And I can't not mention Izzy Liendo who I had for Intro to Literary Theory and then a queer theory course over the summer,” Ainsley says. “She’s always been really encouraging, and she teaches very well even when circumstances had her teaching virtually from Shanghai at 1 a.m. her time. It’s a real testament to her skills as a professor.”

With the academic and personal formation received at Guilford, Ainsley has gained wisdom that applies to students in creative fields and that can help students in all majors.

“It’s very hard, and it's something I can't always do, but if you can learn how to separate yourself from your work, it will be a tremendous help. When it comes time to edit anything, if you're really passionate about it, that's great, but it also means that you frequently will take criticism of your work as though it’s criticism of you,” Ainsley says. “If people are giving you feedback on your work it's because they think it’s at least interesting enough, that it has potential, and you are competent enough to make revisions and bring out that potential. Not taking comments on it personally is a really challenging but powerful skill.”

Schedule your personalized visit to Guilford to learn more about the College's Philosophy and Creative Writing majors. You'll also meet students like Ainsley, who will share why Guilford may be the perfect fit for you, too! For more information, contact the Office of Admission at 336.316.2100 or admission@guilford.edu.

Shooting for the Stars

As a Greensboro native and academic and basketball all star, Julius Burch ’23 had his pick of North Carolina’s more than 80…