To know – that’s what Colin Ganges ’19 has been seeking since his earliest days. His first seven years were spent on the campus of Rutgers University in New Brunswick, N.J., where his mother worked. Since then, he’s always felt at home in academic settings, whether it was his Catholic elementary and middle school or his Quaker high school. When it came time to choose a college, his standards were well-defined.

“(CPPSET) helped fund an internship where I was a legislative intern for Rep. Al Green in D.C. I also worked in the CPPS office for my work-study all four years and was a TA ... on a course called ‘Sacrifice.’ I loved helping ... organize events and learn the practical application to ethical leadership and solving real-world problems."

“When I was researching colleges, I knew I wanted two things: a values-based education and small class sizes. I went to Princeton Academy of the Sacred Heart for elementary and middle school and George School for high school — both of which had clearly defined values and very small class sizes,” says Colin, a Philosophy major, Religious Studies minor, and Honors student, who recently joined the board of trustees of Princeton Academy of the Sacred Heart as the first alumnus member.

“I also wanted to be surrounded by professors who knew me as an individual,” he shares. “At Guilford, I think a great signifier of this is that everyone’s on a first-name basis. To me it showed an appreciation for the similarity between everyone on campus.”

Colin’s passion for philosophy took root in high school when he took an IB course called Theory of Knowledge, a philosophy course on epistemology, or the philosophy of knowing.

“It was one of the first classes that just clicked. The homework didn’t feel onerous. I enjoyed spending time thinking about the subject, and the essays allowed for a level of intellectual curiosity that I didn’t feel in other classes,” he explains. “In college, there was no calculation when deciding to major in Philosophy. I wanted to study a topic that I was excited to learn about whether homework was assigned or not,” he says. 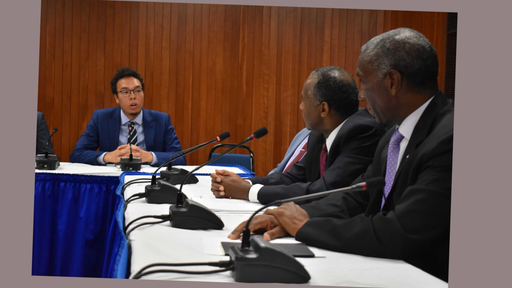 Today, Colin is an account coordinator for a speechwriting firm in Washington, D.C., called West Wing Writers. He serves on a client team that provides speeches, brand messaging, and a wide variety of writing projects for a large tech company. Speeches were the first genre of writing that Colin truly enjoyed.

“I could recognize the skill it took someone to write it. In high school, I wasn’t a consistent reader but became interested in African American history and wanted to learn more on my own,” he explains. “I decided to read the speeches of Martin Luther King Jr., Malcolm X, and the Black Panther Party as a way to understand their thoughts and their unique vantage point,” he says.

At Guilford, he worked on Rep. Kathy Manning’s first congressional campaign and was asked a few times to complete writing projects for the campaign, which he loved doing. Then, in his senior year of college, he met and began to work with one of former President Obama’s speechwriters.

“I was hooked. It combined my love for philosophical argument, logical reasoning, and persuasive writing, while advocating for ideas I believed in. And now, tech writing taps into my interest of finding ways to communicate complex ideas to a large audience,” he says.

At Guilford, Colin was an Orientation Leader, a Center for Principled Problem Solving (CPPSET) scholar, and a Multicultural Leadership Scholar Program (MLSP) scholar. He credits CPPSET and Mark Justad, the director of the center, as major influences.

“They helped fund an internship where I was a legislative intern for Rep. Al Green in D.C. I also worked in the CPPS office for my work-study all four years and was a TA for Mark on a course called ‘Sacrifice.’ I loved helping CPPS organize events and learn the practical application to ethical leadership and solving real-world problems,” he says.

Colin also notes that the Honors Program was one of the places on campus that really challenged him.

“They celebrated our achievements and encouraged us to apply for internships and prestigious scholarship programs that I never considered or knew about,” he says. “They also made us think about life after Guilford in a way that prepared me to be excited to graduate, get a job, and excel.”

Colin wants Guilford students to know that writing — outside of any literary or strictly artistic environment — is an option.

“I didn’t know until I was a junior in college, and that’s only because I met a speechwriter,” he says. “I had no clue that behind speeches, keynotes, and most things you read, there were people like me writing them.”

For those pursuing writing, Colin advises that self-editing is key.

“Some of the best lines I have written are lines that are complete re-writes of sentences I was struggling with,” he says. “It’s also impossible to write a final draft without editing it extensively. I usually spend more time editing my first draft than I do writing it, let alone the amount of time it takes to take client edits and incorporate them into a draft.”

Colin also stresses the differences between speechwriting and academic writing.
“They are similar in a lot of ways, but the tone, word choice, and structure are different,” he explains. “Before you start writing you should take time to think about who will read your words. Ask yourself if you should be formal or casual. In a speech, casual is usually the way to go, which is difficult to remember after years of academic writing, where complex, meandering sentences are common. Finally, having someone read over your work is so important.”

When asked where he wants to take his writing career in the future, he said, “I feel lucky to be where I am now. I’m at a great firm, I work on projects where my words are read or heard by millions of people, and I’m continually learning how to improve," he shares. "But at some point I’d love to write for a politician again. It’d be a great full-circle moment from my first project on Rep. Manning’s campaign, which I’m sure I only got because I was a college student and they assumed I could string a few sentences together. Luckily, thanks to the dozens of essays I wrote at Guilford and the focus my professors had on writing clearly, I wasn’t nervous about saying yes. Now, I’d say thank you to Guilford for that preparation.”

Are you passionate about writing, philosophy, or politics? Are you looking for a liberal arts school that prepares you to make a difference in the world? Schedule your personalized visit to Guilford College, or contact the Office of Admission at 336.316.2100 or admission@guilford.edu to learn more.

Despite graduating and entering the workforce during an uncertain time,