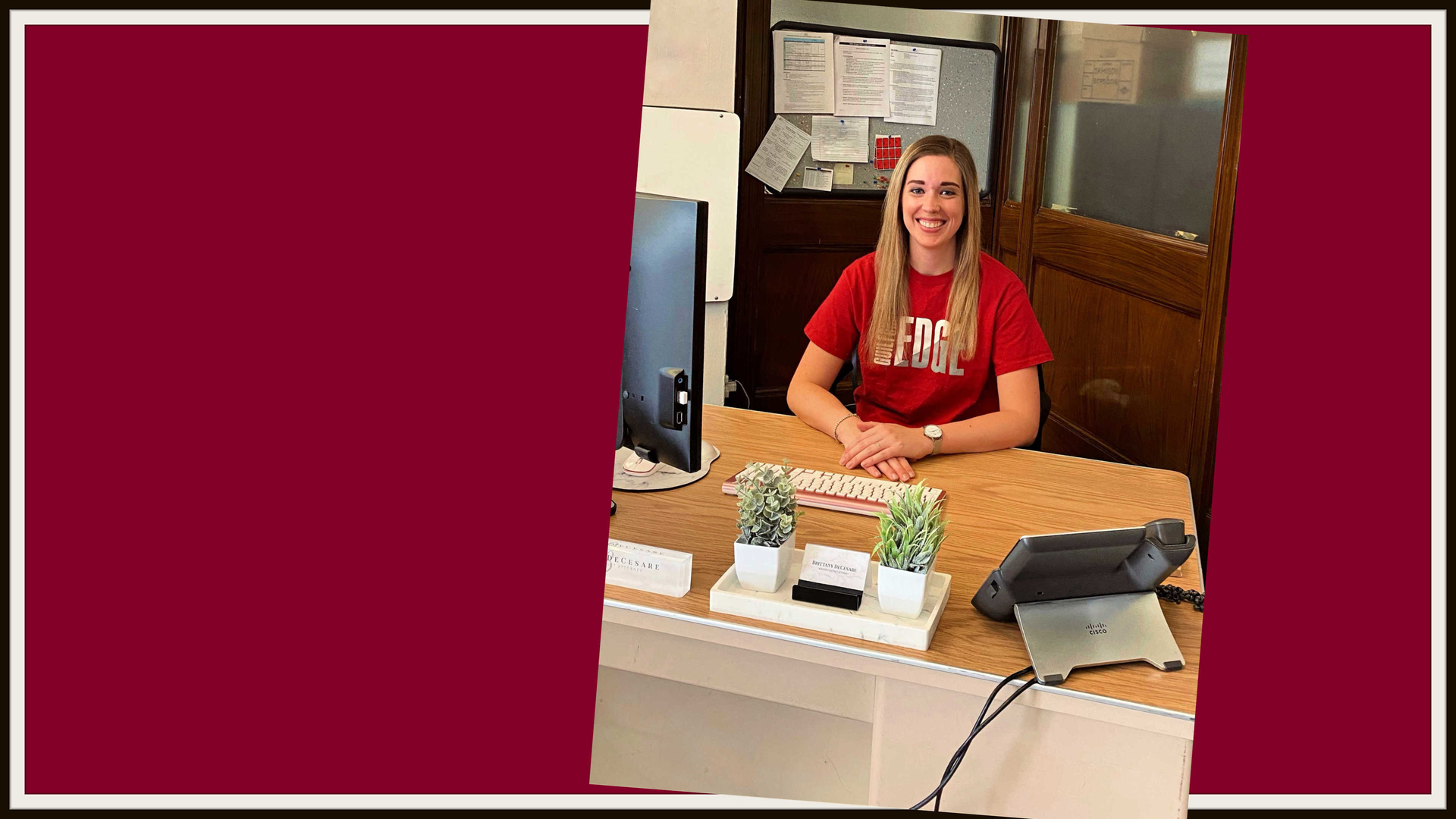 Brittany DeCesare ’15 has spent much of her life on the volleyball court. Her dedication to the sport — and to her studies — paid off many times over at Guilford and beyond.

“I wanted to go to a school to play volleyball, but I didn't want to go to a big school where I was just going to be another number and my professors didn't really know me. I wanted to be a student-athlete where student is first."

Quaker Coach Emily Gann recruited the outside hitter and Dean’s List student from Croton-on-Hudson, N.Y., because of her academic and athletic prowess.

“I wanted to go to a school to play volleyball, but I didn't want to go to a big school where I was just going to be another number and my professors didn't really know me. I wanted to be a student-athlete where student is first,” says Brittany, who double majored in Psychology and Community and Justice Studies. She also notes the benefits of the instant friendships and sense of community she experienced being on the volleyball team.

Now an assistant district attorney in Manhattan, Brittany spends time on a different kind of court — criminal court. She earned a three-year contract from the district attorney’s office straight out of Pace University Law School in White Plains, N.Y., earlier this year.

Brittany’s meteoric rise was in part due to one of her Guilford experiences. Inspired by a forensic psychology course she took while studying abroad in Australia, Brittany went on to earn a master’s degree in the field from John Jay College of Criminal Justice in New York City. After graduation, she applied to law schools.

Since the age of 9, Brittany knew she wanted to study law, and her interest never waned. She intended to specialize in family law. She even worked for such a firm, but her experience with litigation in both mock trial and moot court during law school took her in a new direction: criminal law. She appreciated the intersection of psychology and criminal law. As graduation drew near, she was made aware of a great job opportunity.

“One of my friends who is a year older than me got a job at the Manhattan DA’s office the year prior to me. He said it’s a great place to work, and I would be a great fit,” she shares. “He encouraged me to apply so I did — and here we are.”

One reason Guilford was such a great fit for Brittany was that it facilitates how she learns best.

“Two of my stronger skills are speaking and writing. Test-taking was never really one of one of my strong suits. Most of my classes primarily dealt with presentations. I like to speak and work with people,” she explains.

[Explore the majors and courses that make up the unique Guilford College Community and Justice Studies program.]

Brittany also credits her close relationships with such professors as Rachel Riskind in Psychology for getting her where she wanted to go in her career. Her professors’ letters of recommendation for her post-graduate studies were invaluable, she says.

During her Guilford years, Brittany tapped into her law-school aspirations and served as a judicial advocate for students who have violations on campus. “They had the opportunity to come speak with us and then ultimately have a hearing,” she says.

Brittany notes that undergraduate students may choose to major in a variety of fields before deciding on a law career. That’s because the legal profession needs people with all kinds of expertise, she says. For example, one of her colleagues majored in neuroscience.

“I promised myself that when I went to law school, if I took a certain class or if I had a certain internship or experience that really sparked another interest in me, I wouldn’t shy away from pursuing another field just because I’d had an idea in my head for so long,” she says. “That's ultimately what led me to the DA’s office.”

Are you interested in studying psychology at a North Carolina liberal arts college? Do you have dreams of attending law school? Schedule your personalized visit to Guilford College to learn more about Psychology and Community and Justice Studies.

From Coffee to Career

Though they attended college years apart, Jamie Skjoldager ’18 and Mary Luong ’08 found a shared passion — and…