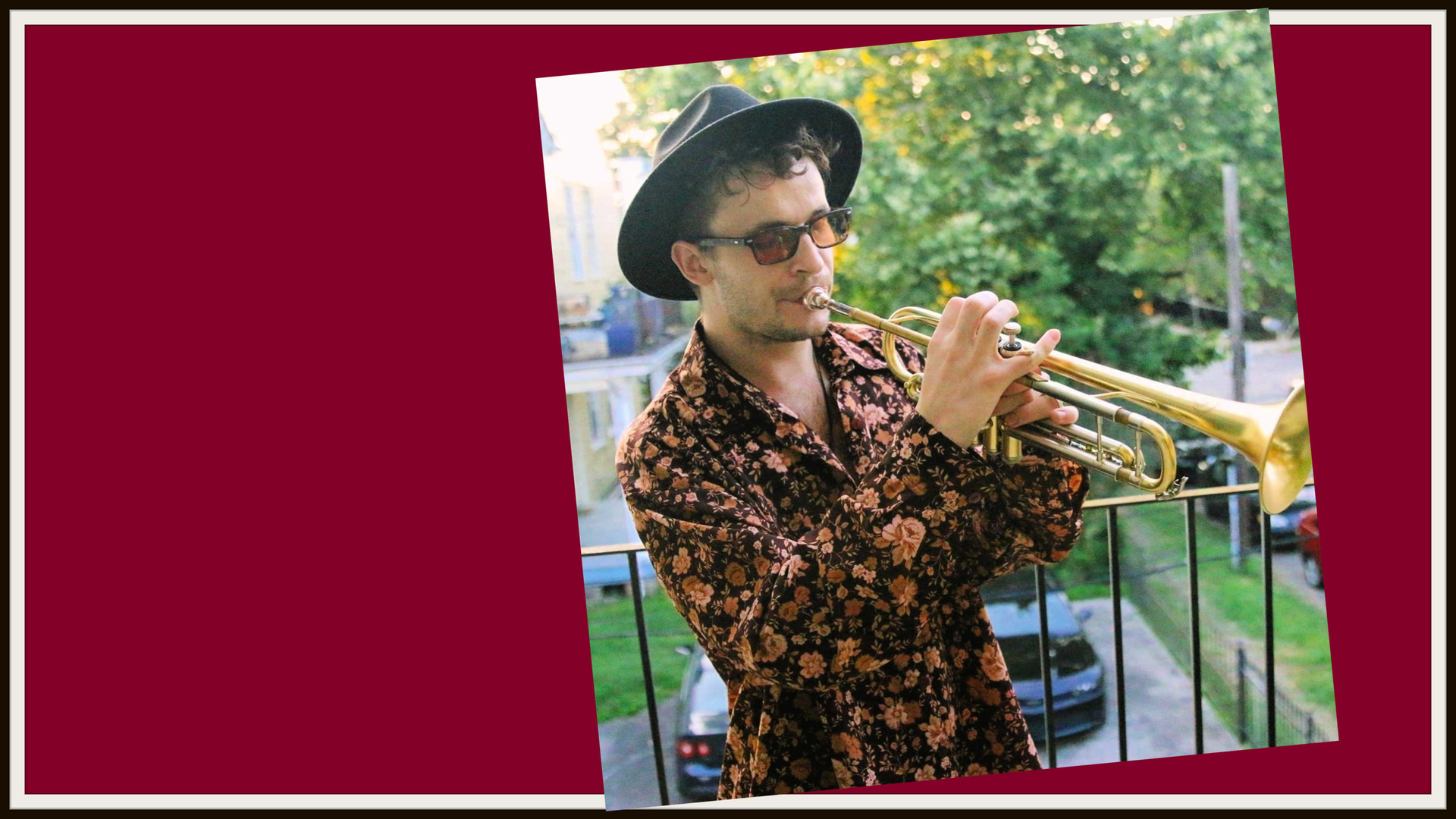 Wise beyond his years, Boston native and Music major Benjamin Matlack ’15 says his goals consist of finding one thing: balance. In the meantime, Benjamin has realized his dreams of being a full-time musician as a prolific trumpet player in New Orleans.

“I had such individualized attention (at Guilford), particularly from the Music Department and Drew Hays, who really took me under his wing, taught me so much, and gave me all the skills to succeed in my career. I’m very grateful. I had a very beautiful time at Guilford.”

As a member of five bands, Benjamin has an unconventional and demanding schedule playing into the wee hours of the morning. This is in addition to all of the prep work, which includes practicing and marketing the bands. Yet he recognizes this as his calling and he accepts the sacrifice that comes with it. His gratitude outweighs any discontent.

“I’m so grateful to be doing this full time without needing a day job,” he says. “There’s so much work in New Orleans and the cost of living here is still very low.” He notes this for good reason, having been recently displaced for a few weeks by Hurricane Ida.

Even this was a blessing because it gave him a reason to visit Guilford — another gift for which he’s thankful — a personal and well-rounded education from his mentors, who include Drew Hays and Tim Lindeman. During his recent visit he was able to spend some time and perform music with Drew.

“Studying music in particular is a lot about who you study with, the actual people who you spend so much time with. Drew and Tim were big influences,” says Benjamin, who majored in Trumpet Performance and was a TA for Music Theory. “Tim, who was the Chair when I was at Guilford, taught all my theory classes. He made a really big impact on me because he was an amazing teacher who has a special touch for relating advanced theoretical ideas.”

Before moving to New Orleans, Benjamin was the head of audio for Quaintance-Weaver Restaurants and Hotels in Greensboro. He also played in O.Henry Hotel’s jazz series.

Now his gigs are primarily on Frenchmen Street in New Orleans where there are 15 well-known clubs within about a three-block radius. He can walk there from his home where he enjoys a private balcony — a vision of quintessential New Orleans. His main band is SingleMaltPlease and they play hip-hop jazz with a modern twist.

The music they make owes at least some tribute to Benjamin’s jazz roots.

“My grandmother is from Cuba, and my grandfather is from Puerto Rico, so I grew up listening to a lot of Latin music, which is very trumpet-centric,” he recalls fondly. “I remember being really young and seeing a Latin band trumpet lead in the center of town and being infatuated with the horn.”

It didn’t take long before a horn was in his hands. He was just 7 years old.

“I was lucky enough that my parents got me a rental trumpet before it was offered in school, so I always had a step up. I was always first chair,” he says. “By the time I was in high school, I knew it was what I really wanted to do.”

In Benjamin’s high school, the jazz band was very competitive.

“We were ranked second in the nation by the time I graduated, and the conductor there, Sabatino D’Agostino, is a trumpet and bass player from Italy. He introduced me to jazz when I was 14 through the music of Dizzy Gillespie, who did a lot of Latin jazz, and then that got me into other kinds of jazz.”

What advice does he have for young musicians who aspire to perform full time?

“Move to New Orleans,” he says without a hint of jest. “I knew a lot of people from my graduating class who are brilliant musicians. They have to work five days a week and then do music on the side because they chose New York instead of New Orleans. I'm always trying to convince them to move. It’s such a supportive atmosphere here.”

Benjamin’s love of place extends to Greensboro — and Guilford.

“I had such individualized attention there, particularly from the Music Department and Drew Hays, who really took me under his wing, taught me so much, and gave me all the skills to succeed in my career,” he says. “I’m very grateful. I had a very beautiful time at Guilford.”

Are you interested in becoming a Music major at North Carolina college? Learn more about the Guilford College Music Department during your personalized visit to campus. Register today.

Since graduating two years ago from Guilford College, Robin Bigaj ’19 has navigated a long and winding road as she searched for…