Guilford College will present Dr. Jocelyn Bell Burnell with an honorary Doctor of Science during the 2021 Commencement ceremony. She will also serve as this year's Commencement speaker. 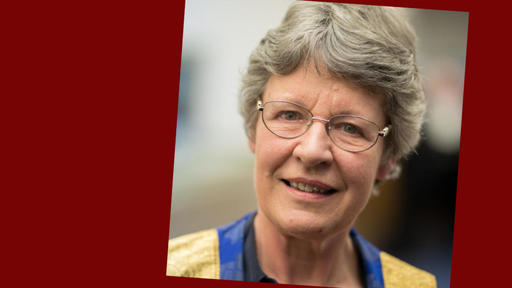 Dr. Bell Burnell, a British, Quaker astrophysicist, is known for her 1967 discovery of pulsars, or collapsed stars, which opened a new branch of astrophysics and led to a Nobel Prize for her supervisor. In 2018 she was awarded the $3 million Breakthrough Prize in Fundamental Physics, which recognized not only her research but her scientific leadership in the 50 years since her discovery.

“I am thrilled that Guilford is awarding this honorary degree to Dr. Bell Burnell, whose life and work model the habits of creative and critical thinking as well as personal integrity we seek to foster in our students," says Interim President Jim Hood '79. "Her commitment to accessible education for the less well-served complements Guilford’s similar passion, and her position as a Quaker scientist places her in a long, impressive line of Friends who have dedicated their lives to deepening our understanding of the created world."

Throughout her career, Dr. Bell Burnell has worked tirelessly to improve education in the United Kingdom, particularly for underserved populations, while raising her family. She worked many years for the Open University, a distance-learning school that serves students who cannot attend traditional universities. And when she won the $3 million Breakthrough prize, she decided to give the entire award to the Institute of Physics to support women and minorities in the field.

Dr. Bell Burnell has strong ties to Guilford, as she visited the College for a week during her sabbatical at Princeton. During her time here, she says, it occurred to her that she could integrate her Quaker life into her professional life. She spoke at New Garden Friends Meeting about her recollections regarding the divine and her life as a scientist. She also spoke to the College’s Physics students about the phenomenon of interference.

The public appreciation and understanding of science have always been important to her, and she is much in demand as a speaker and broadcaster. In her spare time she gardens, listens to choral music, and is an active Quaker. She has also co-edited an anthology of poetry with an astronomical theme, Dark Matter; Poems of Space.

Dr. Bell Burnell’s list of awards includes: the J. Robert Oppenheimer Memorial Prize (1978), the Beatrice M. Tinsley Prize (1986), the Herschel Medal (1989), the Michael Faraday Prize (2010), and the recent Special Breakthrough Prize (2018), among many others. In 1999, she was appointed Commander of the Order of the British Empire for services to Astronomy and promoted to Dame Commander of the Order of the British Empire in 2007. She has served as Clerk of Britain Yearly Meeting and as President of the Royal Astronomical Society. And as reported in the Guardian, she became the first female president of both the Institute of Physics and the Royal Society of Edinburgh and helped set up the Athena Swan program, which is widely credited with improving the lives of women in academia.