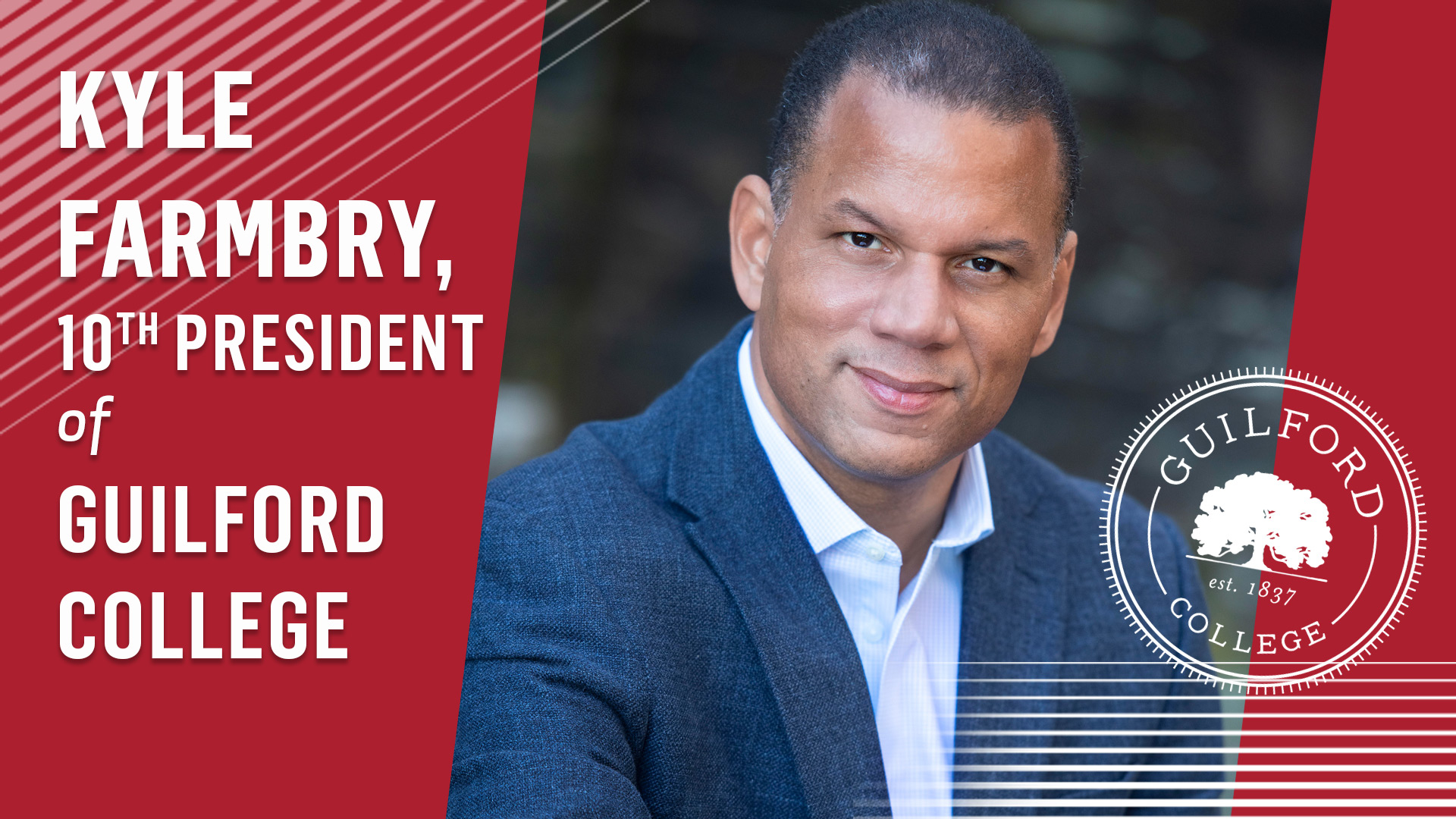 Kyle Farmbry, a lifelong academic leader and scholar of entrepreneurial development and global education, will be the 10th President of Guilford College,…

Kyle Farmbry, a lifelong academic leader and scholar of entrepreneurial development and global education, will be the 10th President of Guilford College, effective Jan. 1, 2022. The College’s Board of Trustees appointed Farmbry, who is Professor of Public Administration in the School of Public Affairs and Administration at Rutgers University, Newark, where he previously served as Dean of the Graduate School.

Board of Trustees Chair Ed Winslow said Farmbry is drawn to Guilford College for all the right reasons. “From the very beginning we made it our goal to find a transforming leader and we asked for the community to let us know when we found the right one. And that is what has happened,” Winslow said. “Kyle understands this is a pivotal time in our history, he understands our challenges. But he also recognizes what Guilford has accomplished and he has a vision for what we can do. Kyle’s the leader to forge Guilford’s future.”

Farmbry's current research interest at Rutgers lies at the intersection of academia and private and independent sector entrepreneurial development. Winslow said those interests, coupled with Farmbry’s innovative direction for higher education that go beyond traditional liberal arts, appealed to many people involved in Guilford’s presidential search.

Winslow said Farmbry is excited about extending Guilford’s reach beyond campus and into Greensboro. “Guilford may not be in the heart of the city, but we’ve always taken the city to heart,” said Winslow. “Kyle gets that. He knows the impact Guilford can have across Greensboro in areas like social issues, the arts, and preparing graduates who can step into rewarding careers. He’s going to build those bridges throughout Greensboro.”

Farmbry wants to honor his commitment to students in his current classes at Rutgers this semester but will visit the College periodically in the coming weeks to meet with the Guilford community.

“I am thrilled to join Guilford, and engage with the students, faculty, staff, and alumni in leveraging the College’s foundation of liberal arts education, Quaker discernment, and commitment to social equity for the wellbeing of local, national, and international communities,” noted Farmbry, who is the first African American to serve as Guilford’s President.

He succeeds Jane K. Fernandes, who served from 2014-2020. Guilford has been led over the past year by Interim Presidents Carol Moore and Jim Hood ’79.

A Career in Public Service

A proven senior administrator, executive, and thought leader, Farmbry holds a bachelor’s degree in International Affairs, a master’s in Public Administration, and a Doctorate of Philosophy in Public Administration from the George Washington University. In 2013, Farmbry earned his Juris Doctorate from the Rutgers University School of Law. His training includes his having served as an American Council on Education (ACE) Fellow at the University of Pretoria in Pretoria, South Africa, a Fulbright Research Scholar in Malta, and a Fulbright New Century Scholar in Cape Town, South Africa. The National Academy of Public Administration last month elected Farmbry a 2021 Fellow of the Academy, a prestigious honor recognizing his contributions to public administration and policy.

As Dean of the Rutgers University, Newark, Graduate School from 2013-19, Farmbry managed 14 doctoral programs and 19 master’s-level programs for more than 1,000 students. Before beginning his term as dean, he served as the inaugural director of the undergraduate program in public service in the School of Public Affairs and Administration. While in this role, Farmbry was instrumental in blending an undergraduate program focused on developing an ethos of public service with a curriculum based partially in the liberal arts. Over the past decade, the program has grown from having 10 student majors to more than 200. As a professor, he teaches in areas of public administration, organizational theory, non-profit development, and strategic planning.

Farmbry has dedicated much of his career to diversity and inclusion, issues that reflect Guilford College's own ethos. While completing his doctoral studies, Farmbry served as Director of Diversity Leadership Programs with the Washington Center for Internships and Academic Seminars, an organization that places college students in internships in and around Washington, D.C. Farmbry was charged with placing a diverse population of student interns — more than 150 — on Capitol Hill, in federal agencies, and in nonprofit organizations in Washington.

In his early years as an assistant professor, Farmbry helped launch Diversity in Academia, an initiative that focused on building a pipeline for students from underrepresented communities into faculty roles. Today, several students who participated are serving as faculty and directors of undergraduate and graduate programs in public administration and public affairs in colleges and universities across the country.

In May of 2016, Farmbry established the United States-South African Higher Education Network, an effort aimed at building enhanced collaboration between higher-education institutions in South Africa and the U.S. In November of 2017, he served as one of the founding members of the University Alliance for Refugees and at-Risk Migrants, an effort which aims to engage universities and their communities in local and international advocacy efforts on behalf of refugees and at-risk migrants.

Farmbry’s research and programmatic work has been supported by the Open Society Foundations, the Kresge Foundation, the South African Department of Higher Education and Training, the United States Fulbright Commission, and the U.S. Embassy in South Africa. He is currently working on a project entitled Building a Pipeline for Executive-Level Diversity, Equity, and Inclusion Strategies, which is funded by the IBM Center for the Business of Government.

Farmbry was first introduced to the Society of Friends as a middle school student at Germantown Friends School, in his hometown of Philadelphia. He later spent time attending the Florida Avenue Friends Meeting in Washington, D.C., and the San Antonio (Texas) Friends Meeting.

The process for identifying the new President at Guilford, which began in the fall of 2020, was chaired by trustees David Hopkins ’91 and Harrison Hickman ’75 and advised by recruiting firm AGB Search. Farmbry’s appointment follows a nationwide search involving 79 applicants, a number narrowed by a 25-member Advisory Board, a 12-member Selection Committee, and finally the Board of Trustees.

Hopkins said the process was designed to engage a wide range of members of the Guilford College community. “The feedback received from students, alumni, faculty, and staff, as well as members of the Quaker Community, was vital to informing every step of the search, from developing the President Position Profile that announced the opportunity to the processing of communal discernment that led to the selection. Kyle is a reflection of so many coming together and being heard.”

Hickman agreed: “We’re grateful so many members of the Guilford family showed such an interest in this search. We’re as excited as they are with our new President.”

Founded in 1837 as New Garden Boarding School by the Religious Society of Friends, Guilford College is an independent liberal arts college in Greensboro, N.C., with 1,200 students. The College is widely recognized for its commitments to excellence in teaching, service to the wider community and social justice.

News and Events Faculty and Staff Announcements Office of the President

President Kyle Farmbry announces that LaDaniel Gatling II will be the next Vice President for Advancement at Guilford College.