Dylan Mask ’20, a double major in History and German with a minor in Film from Charlotte, N.C., is still in his first year of teaching English in Freistadt. He’s applying to law school, and he’s also considering a doctorate in History. 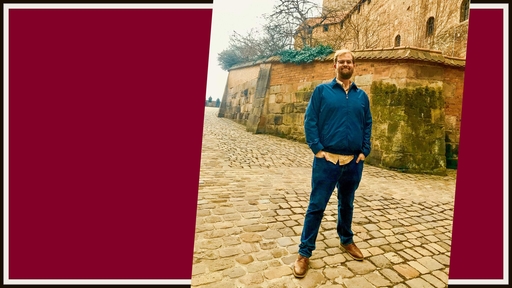 Editor's Note: Dylan is one of five Guilfordians currently living, learning, and working in Austria via the Fulbright Program. To read more about them, visit the main Guilford in Austria, a College Tradition page.

“Life here is similar in many ways to life in Germany, though the German dialect here, called Muhlviertelisch, is difficult for me to understand. But I am slowly learning!” he shares. “When I first arrived in Freistadt, I attended the Pumpkin Festival. It was a great introduction to the region and its people. I even met the mayor. I also traveled to Venice for a week with another Fulbrighter. I’d never visited Italy before and it was a great experience.”

On a whim, Dylan first visited Guilford College with his mom — and that visit sealed the deal. “I chose Guilford because of the close relationships between faculty and students — and the strength of its History Department,” he says.

Dylan earned high honors with the completion of a departmental honors thesis in history. He was also inducted as a member of Phi Alpha Theta, the National History Honors Society, and Delta Phi Alpha, the National German Honors Society. During his first two years at Guilford, he was a member of the Outdoors Club. And during his senior year, he acted as president and co-president of the German Club.

He counts Writing Tutor Doug Smith (a beloved Guilfordian who passed away in 2018), German Professor Dave Limburg, and History Professor Damon Akins, who was also his thesis adviser, as his mentors.

“I’m kind of a nerd so I really enjoyed the academic aspects of college,” he says. “My favorite classes were often the ones in my majors and minor. I also really enjoyed the German class I took on the Weimar Republic, as well as my history thesis work.”

His advice for current students is all about involvement on campus.

“I think getting involved in your major and any associated clubs or organizations, including study groups, is vital to academic success at Guilford,” he says. “Consider the Guilford in Munich program, too, or another Guilford-led study abroad program. If you want to apply to Fulbright Germany or Austria, it’s important that you study German with Dave, either a major or minor, and study abroad. If you’ve done all of that your chances of being accepted will be high!”

Schedule your personalized visit to Guilford to learn more about the College's study abroad offerings. You can also begin your application or contact the Office of Admission for more information — 336.316.2100 or admission@guilford.edu.

Read about more Guilfordians in Austria.