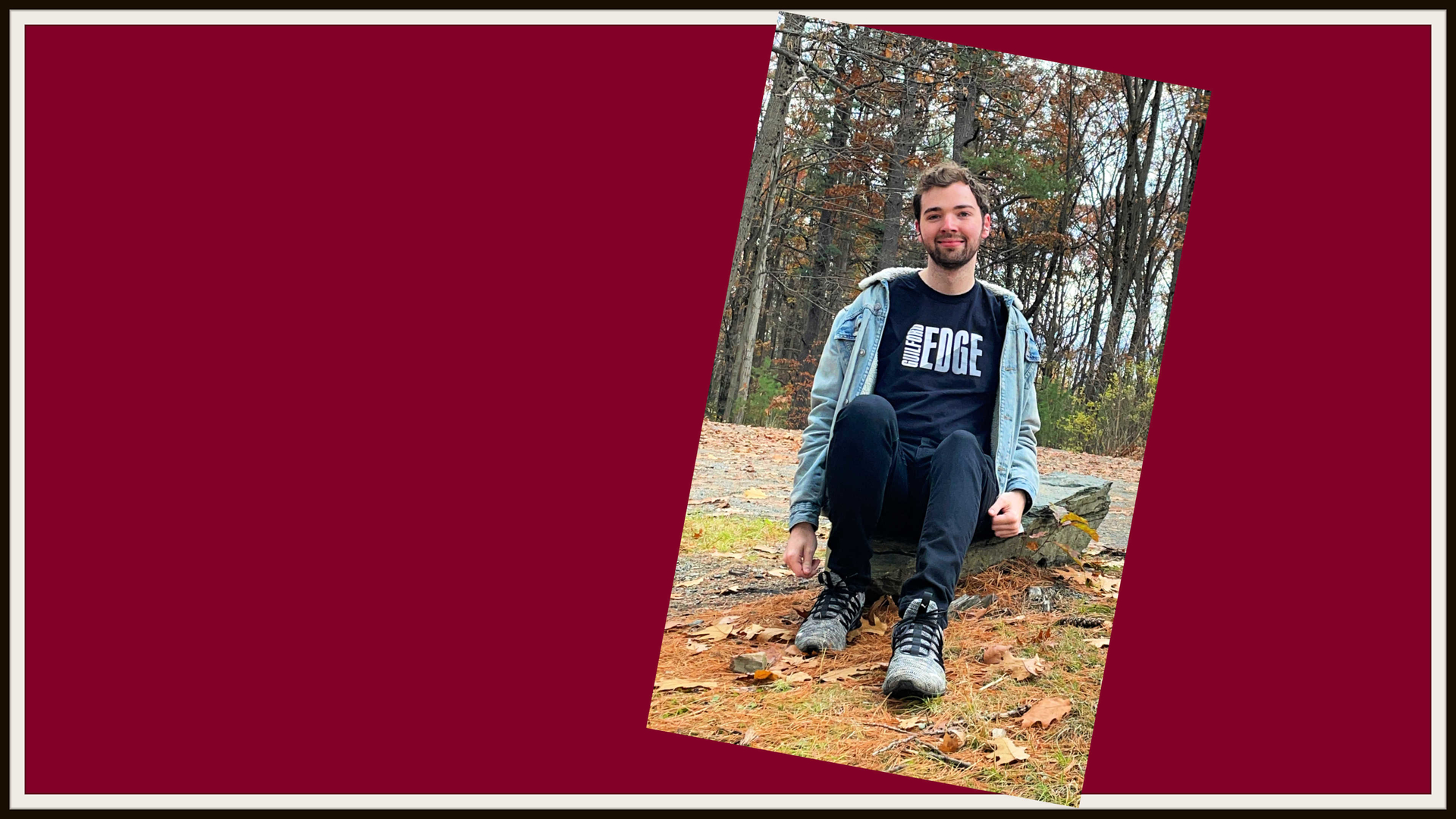 At once erudite and humble, English and Creative Writing major James Mitchell ’21 has a gift for words. The aspiring historical fiction author may owe some of his unassuming nature to his small-town roots. He enjoyed coming of age in Kernersville, N.C., less than 20 minutes from Guilford. “It was such a great place to grow up,” he says.

“There’s a vulnerability in putting your creative work out there for people to see regardless of the content, and I just forced myself to do it. In the end it wasn’t that difficult because, going back to the Quaker values, the support system at Guilford is so strong and so welcoming. Sticking to Quaker values, that’s Guilford’s winning ticket.”

It was there, at Cash Elementary School, that he discovered his incredible aptitude and passion for reading. In third grade, he was reading at an eighth-grade level and devouring the school library’s history selections. “I read every single book,” he recalls.

Even at that tender age, James knew he had stumbled upon his life’s vocation.

“When I was thinking about becoming an adult and having to make a living and what my dream job would be, I realized that contributing to a library for a young adult or an adult to read about history would be very rewarding,” James says. “I wanted to be a historical fiction author. I wanted to give back basically, and I found that I had a talent and a passion for writing. I decided to pursue the pipe dream as it were.”

After homeschooling for high school, he chose Guilford for a variety of reasons.

“I was initially attracted to Guilford because I wanted to and I still am looking to be an author. Guilford College had a great reputation for anything and everything to do with the liberal arts. I really felt welcomed, even before I applied, by the Quaker values that Guilford espouses. It was just the perfect storm of great reputation for the field that I wanted to go into, great values, and still close to home, so it felt familiar.”

At Guilford, James’s professors and involvement as a writer and the editor of the Greenleaf Review, the College’s literary magazine, nurtured and developed his talent. His prose fiction piece on the trolley problem set in the Wild West was published in the fall 2020 issue of the magazine.

For a class assignment, James wrote a fictionalization of Oscar Wilde’s meeting with Sir Arthur Conan Doyle. “They met up, and no one knows what kind of conversation they had, but we do know that whatever conversation they had propelled Oscar Wilde to write his first and only novel, The Picture of Dorian Gray,” James says. “I wanted to explore a fictionalized version of what it was they talked about over that fateful dinner.”

He also notes Professor Jennie Malboeuf for influencing his writing style, which he calls “pink prose”— weaving a mix of words that are substantive but also poetic, which suits his historical fiction genre.

“I credit Jennie and her teachings for my particular style of writing. I really try and walk that fine line of substantive and poetic writing that sounds nice,” he says. “She was instrumental in creating that style for me. We examined poems so closely and so deeply, including how they work and the musicality that can exist without instruments.”

When he gets down to the brass tacks of writing, James describes his approach. “Whether read aloud or just read in your own mind, I really pay close attention to how my sentences sound and flow and the cadence therein.”

Guilford proved to be fertile ground for James to pursue his dreams. He’s currently studying creative writing in graduate school at Dartmouth College in Hanover, N.H. During his first semester, James is writing a novella in epistolary style similar to the semi autobiographical work of his favorite author — Carrie Fisher’s Postcards from the Edge.

“There’s a vulnerability in putting your creative work out there for people to see regardless of the content, and I just forced myself to do it. In the end it wasn’t that difficult because, going back to the Quaker values, the support system at Guilford is so strong and so welcoming,” James says. “Sticking to Quaker values, that’s Guilford’s winning ticket.”

Schedule your personalized visit to Guilford College to meet the award-winning faculty and to learn more impressive opportunities that Guilford's English and Creative Writing Department offers its students.

Growing up amid the splendor of the Blue Ridge Mountains,