Stop Cyber Criminals in Their Tracks

It is reported that the Pentagon repels more than 10 million hacking attempts per day, and the state of Utah repels almost 20 million hacking attempts per day (likely due to the new NSA station in that state). To combat hacking and to investigate computers used in crimes, the practice of cyber security at Guilford is founded upon technological scientific knowledge, ethics, principles and practices which are best learned through formal education and training and the proper conduct of research.

The Bureau of Labor Statistics has projected the demand for information cyber and network security analysts will increase by 37 percent between 2012 and 2022. Moreover, as of March 2015, the Pentagon planned to add more than 3,000 experts at U.S. Cyber Command. This would add to the more than 6,000 cyber security specialists already employed with starting salaries ranging from $40,000 to $130,000.

For more information about courses for the Computing Technology and Information Systems Department, visit the online, searchable College Catalog. In addition to the Undergraduate Catalog, information includes academic department and major information as well as academic regulations and resources; admission standards and requirements; and tuition, fees and financial aid information. 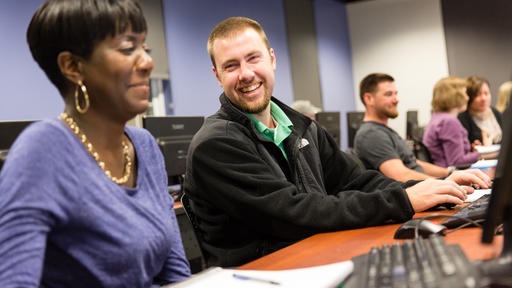 Cyber and Network Security majors have performed internships at Secure Designs, and more internship sites are being added each semester as students begin moving through this new program. Students have also been accepted into the Cisco Global Cybersecurity Scholarship program.